Louis Tiffany coined the word “favrile” and later had it established as a trademark of the Tiffany Studios, to apply to the special glass he created. The word derives from the old English “fabrile” meaning handmade or belonging to a craftsman. Louis Tiffany studied art and painting in America, Europe and the Orient. As early as 1875, Mr. Tiffany began work which would minimize the use of paint or enamels applied to the surface of glass, the traditional method of creating “stained glass.” Tiffany discovered that to create glass, where color is inherent within the glass rather than applied, it was essential to have his own glassworks to controls chemical experiments and glass production. He established a new glassworks factory at Corona, Long Island in 1892.

Being able to oversee his own furnaces allowed him to experiment with and carry out his own ideas. In these furnaces was made a pot-metal glass which was forced into folds and wrinkles while in a molten condition. These folds were adaptable to many forms of drapery. The development of iridescent colors and all the varied hues and shades in Favrile glass called for a great chemical knowledge on the part of Louis Tiffany.

If you are interested in touring the Tiffany Windows at First Presbyterian, please call us at 785-233-9601. For large groups, we can arrange for a docent, guided tour. 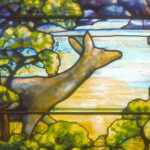 The First Landscape Window: The eye is drawn to the deer in the lower left-hand corner, looking out over the expansive wooded landscape and its winding stream pointing to a vista of blue sky through the trees leading to the hills in the distance.

The First Landscape Window: As you enter the Sanctuary from Disciples Hall, the first landscape window, based on the opening verse of Psalm 42, will be on your immediate left.

The Second Landscape Window: In the foreground sheep graze on the hillside beside a babbling brook. 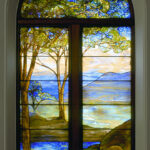 The Second Landscape Window: Across the Sanctuary on the south wall one finds the tranquil pastoral scene of Psalm 23, perhaps the most beloved of all the psalms. 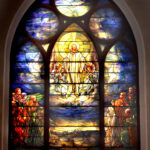 The Ascension: This magnificent window is one of the largest examples of a Tiffany church window in existence today, measuring approximately 13 feet, three inches, by 18 feet.

The Ascension: When the morning sun shines on this window, the sky above Jerusalem takes on a luminous hue, casting both light and shadows on the earth-bound disciples. 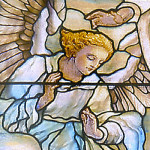 The Ascension: It shows Christ, surrounded by a golden aura, ascending into the midnight blue heavens with two angels beside him. 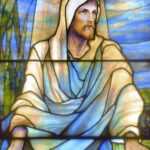 The Baptism of Jesus: The shadowing on the robe of Jesus, on the hand, arm, sleeve and face of John the Baptizer speak to Tiffany’s remarkable ability to place light just where he wanted it in his picture windows. 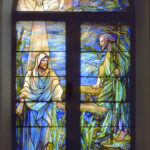 The Baptism of Jesus: A shaft of light from a descending dove that washes over the figure of Jesus highlights this window on the south wall. 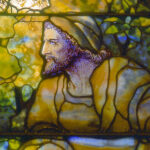 The Call of Matthew: This jew, despised by his own people because he collected taxes for their Roman oppressors, is portrayed as rising from his seat in response to Jesus’ call to be a follower, a disciple.

The Call of Matthew: Across the Sanctuary one finds Jesus bidding Matthew the tax collector, “Follow me.” 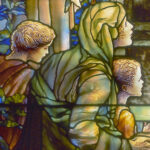 Christ Blessing the Children: Tiffany portrays a more glorified Christ the King, sitting on a throne surrounded by angels, rather than Jesus the Galilean carpenter. 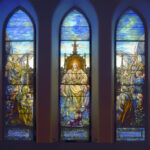 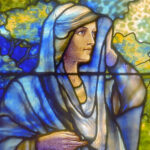 Christ and the Valiant Woman: The woman represents the highest type of Christian love and charity whose “children rise up and call her blessed; her husband, too, and he praises her.” (31:28) 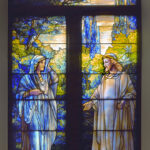 Christ and the Valiant Woman: The adjoining window has for its subject the figures of Christ and the wife, mother, business woman, homemaker and woman of faith memorialized in Proverbs 31. 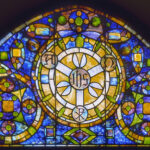 The Jesus Medallion: This medallion contains three symbols for Jesus. 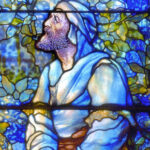 Jesus and Nicodemus: Nicodemus, a respected Pharisee and leader of the Jews, “came to Jesus by night” so as not to be discovered by his friends and colleagues, who, no doubt, would disapprove of the visit. 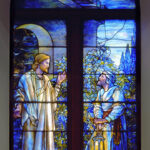 Jesus and Nicodemus: Next to the Call of Matthew is one of the most remarkable windows in the Sanctuary. 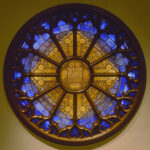 The Chancel and Rose Window: The Rose Window above the chancel represents the only non-Favrile glass in the Sanctuary. 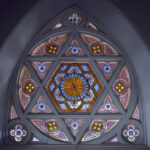 Star of David Window: This window, which does not contain Tiffany Favrile glass, is the only full stained glass window remaining from the original church built in 1884.